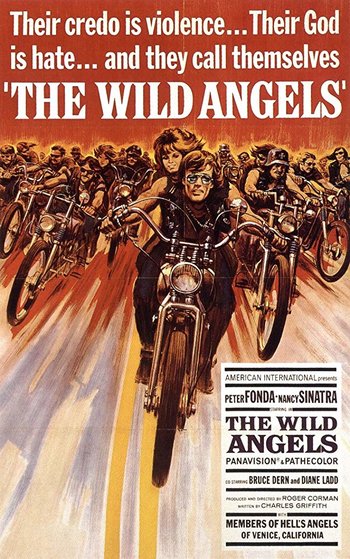 Heavenly Blues' gang is about to run you over.
Advertisement:

The Wild Angels is a 1966 outlaw biker exploitation film made by Roger Corman.

The film tells the exploits of the "Angels", a California motorcycle gang led by Heavenly Blues (Peter Fonda), and their adventures while looking out for their member Loser (Bruce Dern). Nancy Sinatra and Diane Ladd also appear as Blues' girlfriend Mike and Loser's wife Gaysh, respectively.

This was the first film to associate Peter Fonda with Harley-Davidson motorcycles and 1960s counterculture, being made three years before Easy Rider. In fact, Fonda got the idea for that movie after seeing a picture of himself and Dern on their motorcycles in this movie.