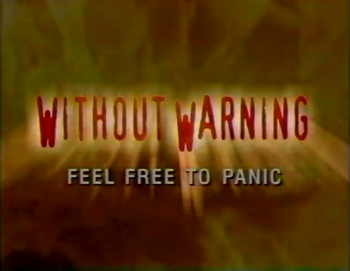 CBS' original broadcast title screen.
"Fifty-six years ago tonight, America was shaken to it's [sic] core by 'War of the Worlds', Orson Welles' classic radio broadcast about an alien invasion of Earth from Mars. Many americans believed visitors from outer space had actually landed and there was nationwide panic. It was the most startling radio broadcast of all time.
"On tonight's anniversary of "War of the Worlds", CBS presents another story... Perhaps as disturbing and equally alarming.
Advertisement:
"What you are about to see is pure fiction. It is not actually happening. But could events depited in this special program someday take place?
"Judge for yourself."
—CBS' introductory graphic/voiceover' prior to the broadcast of the film.

Without Warning is a CBS Made-for-TV Movie from 1994, directed by Robert Iscove, that interrupts the regularly scheduled program with a breaking news story about a meteor impact in Wyoming that is quickly joined by bizarre phenomena (including an apparent Rapture) and a pair of other meteor impacts in France and China which, together with the first, form a pattern that appears to some scientists as deliberate.

Like Orson Welles' 1938 radio production of The War of the Worlds, this movie is a Phony Newscast that was broadcast on Halloween, and allegedly more than a few people were taken in by the realism. This wasn't the first time American network TV had aired a realistic newscast: in 1983 a nuclear terrorism incident was dramatized in Special Bulletin.

Not to be confused with the 1980 sci-fi film of the same name.

"Without Warning" was not an actual newscast. This was a fictional movie.