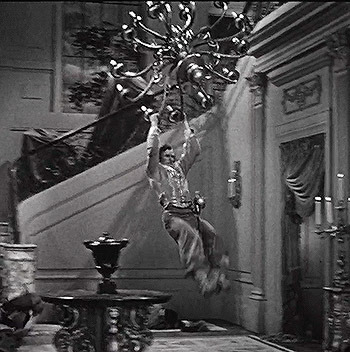 That prominent chandelier isn't always just waiting to fall on somebody. Sometimes it's there for the swashbuckling hero to swing from during the fight scene.

A staple of films where Rule of Cool allows the fight choreography to use bits of set as gymnastic apparatus. Anything hanging from the ceiling will bear a man's weight swinging from it. Bannisters and mantelpieces are for beam routines or sliding down. Curtains may be climbed. Refectory tables will become fencing pistes.

These days, mostly a Dead Horse Trope, as it breaks suspension of disbelief both that the furniture will stand the treatment, and that the enemy won't just stab the hero while his guard is wide open. Usually part of Flynning.