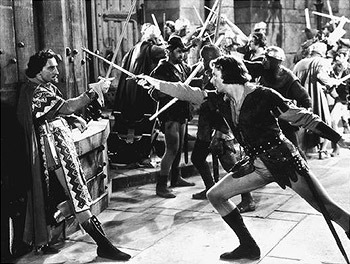 Have at thee, villain!
"It was not like the silly fighting you see with broad-swords on the stage."
— Prince Caspian
Advertisement:

The classic swordplay of Swashbuckling movies: Threaten high countered by parry high, threaten low countered by parry low, lather, rinse and repeat as you climb the spiral tower staircase, until the hero can drive his sword through the villain's heart. It looks exciting, and the "tink-tink-tink" of sword tips clashing has become so familiar to the ear over the decades that this is what most people would think of if you asked them to imagine a "sword fight".

But it's not practical swordsmanship for a real, deadly fight. Instead, it's a type of choreographed fighting for show called Flynning, which often boils down to two combatants deliberately trying to hit each others' weapons with an impressive clanging sound, rather than trying to actually hit each other. Each attack will be deliberately aimed too high or off to the side so that it would miss the opponent even if they stood still without defending, and yet the defender will go out of their way to meet it in midair with a clumsy block instead of taking advantage of the attacker's mistake by avoiding and striking back in the same motion. In theatrics, this trick where two fighters take turns attacking and parrying in an endless loop is called "Pirate Halves." Whenever an attacker seems to attack into a parry instead of straight at their opponent's body, or the defender starts moving to parry an anticipated attack before they could have even seen it coming, it's a dead giveaway that they're following choreography.

Note that just having a lot of parrying or blade-on-blade contact does not automatically make a fight Flynning; what makes it Flynning is that the participants pass up the most direct and obvious opportunities to kill each other, and ignore sound principles of defense in a way that they can only get away with because they're performing a choreographed dance with each other's cooperation.

In the more flashy and energetic varieties of flynning you can expect to see a preposterously reckless offense, typically consisting of 360 degree spins and somersaults that would leave the back wide open. Another hallmark of Flynning is poor application of distance or measure, with the combatants switching between staying just out of reach from being able to deal any critical blows and getting close enough to even Blade Lock. To keep the excitement up, and sometimes to distract from poor blade work, the characters may chase each other through all sorts of locations and environmental perils as they fight.

Exotic Weapon Supremacy will be in effect and Dual Wielding is fetishized as the mark of a superior fighter, often appearing in contexts where it was almost never practiced. Don't expect to see them used with correct technique, either.

Often done to maintain Bloodless Carnage, especially in works geared toward children. Can be used to keep production costs low in animated works with Limited Animation since Flynning can be portrayed via a repetitive loop of two characters whacking their blades against each other.

Named for the film star Errol Flynn, who relied on it as the star of swashbuckling movies such as The Adventures of Robin Hood and Captain Blood.

Compare A-Team Firing, where instead of lots of sword clashing but nobody getting cut, you have lots of bullets flying but nobody getting shot. Contrast Single-Stroke Battle, where both fighters are clearly aiming to kill with their first strike. Poorly done Flynning can lead to Fight Scene Failure. See the Analysis page for a detailed discussion of why getting realistic fights on stage or film is a lot harder (and more dangerous) than it sounds.