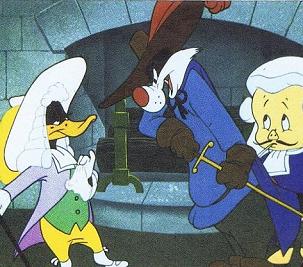 "The Scarlet Pumpernickel" is a 1950 Looney Tunes short, directed by Chuck Jones and featuring Daffy Duck, Porky Pig, Sylvester the Cat, and "Melissa" (a female duck), with cameos by Elmer Fudd and Mama Bear from Jones's Three Bears series. Purporting to be Daffy's own film concept (which he is attempting to pitch to "J.L."note Jack L. Warner), the short is a parody of a typical Swashbuckler — including, of course, The Scarlet Pimpernelnote Pumpernickel is a kind of bread.—including Shout-Outs to Warners' own swashbuckling hero Errol Flynn and much lampshading and subversion of the conventions of the genre.

"The Scarlet Pumpernickel" provides examples of: