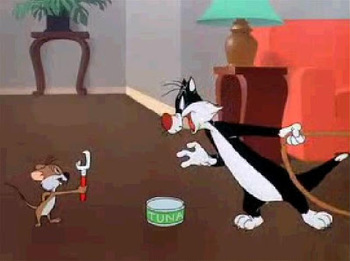 "Canned Feud" is a Looney Tunes cartoon short from 1951, starring Sylvester the Cat, this time without Tweety. It was directed by Friz Freleng.

In this one Sylvester is left at home when his owners leave for a California vacation. They completely forget to put him out and didn't leave food out for Sylvester before they go. Luckily for Sylvester, he finds a large collection of canned food. Unluckily for Sylvester, the only can opener is in the possession of a mouse who doesn't want to give it up. The rest of the cartoon consists of the mouse tormenting Sylvester as he tries to obtain the opener.

The cartoon was semi-remade with Daffy Duck and Speedy Gonzales in 1965 as "Moby Duck".