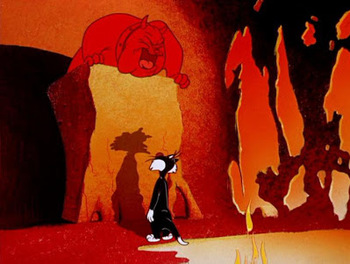 First down, eight to go....
Advertisement:

"Satan's Waitin'" is a 1954 Looney Tunes cartoon directed by Friz Freleng and starring Sylvester the Cat and Tweety Bird.

In this one, Sylvester is chasing Tweety around a building, until he plunges over the edge to his death. But it turns out that cats have nine lives, so Sylvester has eight more to go. The Devil, who wants Sylvester for good, then encourages him to chase after Tweety, getting Sylvester killed over and over again.