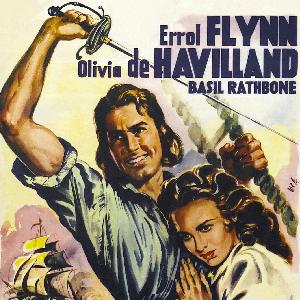 Blood! Blood! BLOOD!
Captain Blood is a 1935 Warner Bros. Swashbuckler of piracy on the Caribbean, directed by Michael Curtiz, and starring Errol Flynn and Olivia de Havilland, based on the 1922 novel Captain Blood: His Odyssey by Rafael Sabatini. The film was nominated for an Academy Award as Best Picture; interestingly, though Michael Curtiz was not nominated, he nevertheless received the second highest number of votes for best director as a write-in candidate.
Advertisement:

Sabatini's wildly popular novel had already been filmed as a silent in 1924. The 1935 film was originally intended as a vehicle for English actor Robert Donat, who had had a great success as Edmond Dantes in The Count of Monte Cristo the previous year, but had to bow out of Blood due to health problems. Flynn, whose most important part to date had been in a wordless flashback in the Perry Mason mystery, The Case of the Curious Bride, was tapped by Jack Warner himself to replace Donat; the devil-may-care Tasmanian of Irish extraction had exactly the quality he desired for the adventurous Irishman, Captain Peter Blood. Olivia de Havilland, having enjoyed a notable success as the feisty Hermia in the Warners' film of William Shakespeare's A Midsummer Night's Dream, was assigned the part of the equally spirited Arabella Bishop. The fine dramatic actor Lionel Atwill played The Heavy part of Arabella's uncle, and Basil Rathbone displayed a fine talent for fencing and sneering villainy (if rather less at imitating a French accent) as the evil pirate Levasseur. Henry Stephenson played the kindly Lord Willoughby, and Ross Alexander made a striking impression as Blood's trusted companion and the ship's navigator, Jeremy Pitt.

The script, by Casey Robinson, was a skillful adaptation of Sabatini's picaresque novel. Much of Sabatini's own prose was included, but several events and characters were omitted or conflated, notably a rival for Arabella's hand, Lord Julian Wade. It is perhaps notable that the script toned down to some extent the religious and national rivalries that are emphasized in Sabatini's more historically grounded novel. Moreover, the script somewhat changed Blood's character, in an effort to increase his level of badass at the expense of the more complex, touchy-feely aspects of his personality. Thus, fans of the book may see it as inferior, despite the film's undisputed status as a classic.

Notable Austrian composer Erich Wolfgang Korngold had been requested by the respected co-director Max Reinhardt of A Midsummer Night's Dream to adapt Felix Mendelssohn's incidental music for the play as a motion-picture score; at the same time the Warner Brothers engaged him to compose an original score for Captain Blood. Korngold's fine Late Romantic score, characterized by Wagnerian themes and Leitmotifs, was a write-in candidate at the Academy Awards, despite the fact that the composer had not the time to complete an entirely original score before the début, but was forced to adapt some of the music from Franz Liszt's symphonic poem Mazeppa.

Other notable talents engaged for the film included fencing master Fred Cavens to choreograph the duels. During the famous duel on the rocks, director Michael Curtiz insisted that Errol Flynn and Basil Rathbone should not use "buttons" on the end of their foils, for greater realism; the actors were thus in actual danger of injury, or possibly even death. This was possibly the beginning of Flynn's lifelong detestation of Curtiz, despite the fact that many of his most notable films were made with the hard-driving Hungarian.

Synopsis
In the reign of King James II of England a rebellion to place the Duke of Monmouth on the throne breaks out. Rebel Jeremy Pitt (Ross Alexander) comes to seek the aid of Irish physician and retired soldier, Dr. Peter Blood (Errol Flynn), to tend to his friend, Lord Gildoy, wounded in battle against the King's Men. While Blood is tending to his patient, he is arrested and brought before Hanging Judge Lord Jeffreys (a creepily memorable performance by Leonard Mudie). Blood and all the rebels are condemned to death.

King James (Vernon Steele), however, prompted by the venal Lord Sunderland, sells them into slavery in Jamaica instead, where brutal Colonel William Bishop (Lionel Atwill) buys most of the men and his sprightly niece, Arabella (Olivia de Havilland), purchases the humiliated Blood. Arabella suggests Blood as a replacement for the gouty governor's bumbling doctors. Blood takes advantage of this to plot escape for himself and his fellow slaves. Bishop, suspecting, whips Jeremy for information, then prepares to whip Blood for interfering, when the town is attacked by Spanish pirates. In the confusion, Blood and the slaves escape and seize the Spanish ship (with the ransom taken from the colonists), and set forth on a career of piracy.

In order to curb Blood's activity, King James makes Colonel Bishop the new Governor of Jamaica; meanwhile, Arabella sails to England on a visit. On her return, she and Lord Willoughby (Henry Stephenson), who has been sent by the King to deal with Blood, are captured by the evil French pirate Levasseur (Basil Rathbone), with whom Peter has unwillingly gone into partnership on the condition that Levasseur will abide by his humane rules. When Peter discovers Arabella's capture, he "purchases" her; the furious Levasseur refuses to give her up, and they Duel to the Death—Levasseur's. His love rejected by Arabella, Peter decides in a fury to take her and Willoughby on to Jamaica, though he knows that Governor Bishop has sworn to hang him.

When he gets there, the capital is under attack by the French, and the protecting English fleet is out pirate-hunting under the command of the Governor; Lord Willoughby entreats Peter to save the town, saying he has been sent by the King to offer him a pardon and a commission. Blood and his crew reject the offer with scorn—until Willoughby informs them that the king in question is not the hated James, but William of Orange, who has seized the throne. They battle the French and win.

Arabella, finding Peter at the Governor's palace, begs him to escape; he forces her to admit that she loves him. Bishop, meanwhile, returns and is arrested; Lord Willoughby informs him that the new Governor will decide whether he is to be hanged or not. Bishop goes to find Arabella pleading for his life with that official, only to find that he is—Peter Blood, who greets him with a "Good morning, Uncle!"

Not to be confused with the TV Tropes contributor Captain Blood. Or the video game series