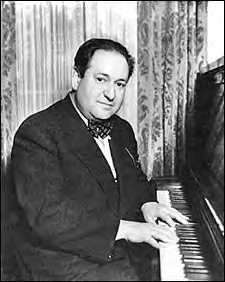 Music is music whether it is for the stage, rostrum, or cinema. Form may change, the manner of writing may vary, but the composer needs to make no concessions whatever to what he conceives to be his own musical ideology.
—Erich Wolfgang Korngold
Advertisement:

Erich Wolfgang Korngold (1897-1957) was born in Brünn, Moravia, in what was then part of the Austro-Hungarian empire, and is today Brno in The Czech Republic. Korngold grew up in Vienna, and soon became known as a musical Wunderkind, playing the piano from a very early age, composing his first original works around 1905, and having his two-act ballet/pantomime Der Schneemann (The Snowman) staged at the Viennese Court Opera in 1910. A series of highly praised works followed, culminating with his third and most famous opera, Die tote Stadt (The Dead City) in 1920.

Stylistically, Korngold's music is the epitome of the "lush" Late Romantic Austrian/German school of Richard Wagner, Gustav Mahler, and Anton Bruckner: full of sweeping themes, a dramatic use of chromaticism, an abundance of memorable melodies, and the use of Leitmotives as emotional guides through the action of a drama. In composing his film scores, Korngold was wont to approach them, he said, as "operas without words."

In 1934 at the request of famed theater director Max Reinhardt, who was already working in the United States, Korngold arrived in Hollywood to arrange Felix Mendelssohn's incidental music for Warner Bros.' film version of William Shakespeare's A Midsummer Night's Dream. One year later, on his second stay in America, Korngold composed film scores for both Warner Bros. and Paramount studios. His first original score was written for Captain Blood in 1935; the next year, Korngold's score for the movie Anthony Adverse received an Oscar for the best film music of the year. Shortly after, he signed an exclusive contract with Warner Bros., making him one of the first world-renowned composers to work for the Hollywood film factory.

Though under contract with Warner Bros., Korngold was living between two worlds, composing film scores in Hollywood, but trying to maintain his concert and opera presence in Europe. In 1938, the Anschluss of Austria with Germany under the National Socialists took the Jewish Korngolds by surprise. To save his family, Korngold moved them to the United States and chose to write film scores regularly. His first movie score as an exiled resident in the New World — for The Adventures of Robin Hood — won him his second Oscar; in later years, Korngold was accustomed to quip, "Robin Hood once saved my life." Until 1946 Korngold composed mainly film music, using his income to support many friends and refugees fleeing the tyranny in Europe. Together with Max Steiner, he stood for a new musical style in Hollywood, in which the highly illustrative but independent music partly intervened in the story of the film by expressing atmosphere, and simultaneously introducing the Wagnerian concept of Leitmotives. Some of the movies he scored include The Prince and the Pauper (1937), Juarez (1939), The Private Lives of Elizabeth and Essex (1939), The Sea Hawk (1940) (the last two both nominated for Academy Awards), The Sea Wolf (1941), Kings Row (1941), and Deception (1946).

Beginning essentially in 1946 he attempted to return to the concert stage and the creation of absolute music. Deftly borrowing themes and motifs from his many movie scores — a key provision in his contract with Warner Bros. — Korngold produced numerous works for the concert hall and stage, but the critical taste of the mid-20th century had turned away from Romanticism. (A critic described his Second Violin Concerto as "more corn than gold." OUCH!) Disappointed by his lack of success in the world of "serious music," in 1954 he traveled to Munich under agreement to work on one last film, Magic Fire, a Biopic of Richard Wagner. Fearing that in less devoted hands Wagner's music would be ill represented on the movie screen, Korngold had agreed to return from retirement and oversee the arrangements of Wagner's music for the film. It would be his last motion picture score.

In 1955 Korngold suffered a stroke, leaving him partially paralyzed; then in 1957, Korngold died as a result of a cerebral thrombosis. Though he believed himself virtually forgotten at the time of his death, Korngold's reputation has been steadily rising since at least the 1980's, and his influence can be heard in the music of many of today's leading film composers such as John Williams and Alexander Courage. Korngold's sizable body of non-film works has also been establishing a place in the concert hall and in a number of recent operatic productions.

Was also a famously witty Deadpan Snarker, particularly in regards to other contemporary composers and the field of music in general.

Films For Which Erich Wolfgang Korngold Composed Original Scores Include: