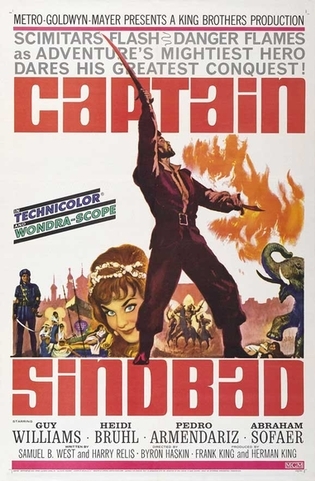 Captain Sindbad is a 1963 "Arabian Nights" Days fantasy adventure film starring Guy Williams as heroic swashbuckling adventurer Sindbad. Along with his intrepid crew, he must free a magical kingdom from the evil El Kerim (Pedro Armendáriz) so he can rescue the beautiful Princess Jana (Heidi Bruhl).

One problem. Kerim is basically unkillable because he's had his heart removed and interred inside a block of ice in a tower in the middle of the jungle. After Sindbad fails to kill Kerim the traditional way, he decides to undertake a perilous quest to the tower to personally stab the villain's disembodied heart and end his reign of terror.

The film features lavish sets and colorful costumes and some fairly decent acting, and although the special effects are not much to write home about, some of the monster designs and ideas behind a lot of what Sindbad and his crew face are quite inventive and memorable, even if the budget wasn't quite up to bringing them convincingly to life. It remained out of print for years until Warner Archive offered it on DVD-R as part of their Archive Collection.