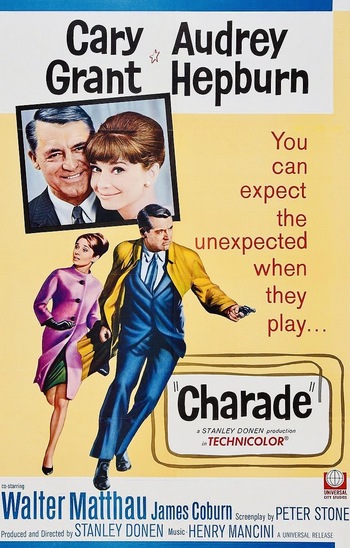 Regina "Reggie" Lampert (Hepburn), an American expatriate in Paris who's preparing to get a divorce, returns from a skiing trip to discover that her husband has been murdered after selling off their belongings and attempting to leave the country. When the police question her she discovers that he had kept multiple passports, each with different aliases, and that he'd been in possession of $250,000,note which in 2020 money, is roughly $2,146,000 which is now unaccounted for. During the funeral, three suspicious men—none of whom she's ever seen before—come to visit the body.

Reggie is then called to the U.S. embassy, where a CIA administrator named Bartholomew (Matthau) informs her that, during World War II, her husband was one of a group of soldiers chosen to transport some gold across enemy lines. However, instead of delivering the gold to La Résistance as planned, the soldiers hid it somewhere, with plans to come back after the war and retrieve it for themselves. Her husband, however, got greedy and came back early, taking all the gold for himself. Now the other three soldiers will do anything to get it back.

While all this is happening, Reggie also has a chance meeting with a man who calls himself Peter Joshua (Grant), whom she enters into a romance with. However, Peter is not who he appears to be, and their meeting wasn't random at all...

Remade in 2002 by Jonathan Demme (The Silence of the Lambs) as The Truth About Charlie, with Mark Wahlberg and Thandiwe Newton. No connection to the 1984 animated short Charade.