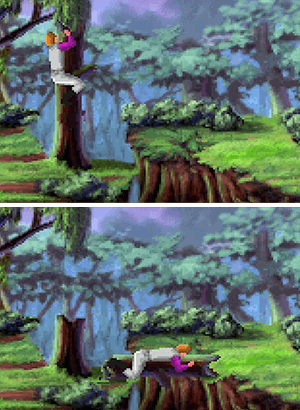 How convenient.
Milo: Will you look at the size of this? It's gotta be half a mile high, at least. It must have taken hundred — no, thousands of years to carve this thing.
[Vinny blows it up so it falls down over a chasm]
Vinny: Hey, look, I made a bridge. It only took me, like, what? Ten seconds? Eleven, tops.
— Atlantis: The Lost Empire
Advertisement:

A tall object, such as a pillar or a tree, is knocked over to make a bridge over a river or chasm.

Nobody ever wonders how remarkable it is that the object just happened to be longer than the chasm's width or placed right next to it, nor do our ersatz bridge builders make any special effort to make sure the object actually bridges the gap instead of just falling into it.

Not to be confused with Fridge Logic, though there may be overlap. See also Improvised Platform.

It's the one from the quote

Alternative Title(s): Lumberjack Bridge, I Made A Bridge

It's the one from the quote