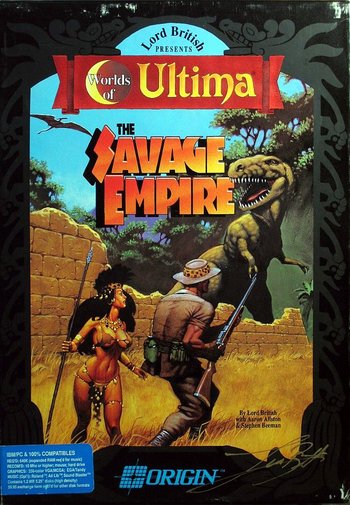 You had disturbing dreams of a faraway jungle, an endangered princess, and the black moonstone you carried away from Britannia in your last adventure there. The spirit of Lord British commanded you to find out all you could about the stone. So you took it to your old friend Dr. Rafkin, curator of the local museum of natural history, hoping that he could unravel the mystery. At Dr. Rafkin's, you met ace reporter and "Ultimate Adventures" correspondent Jimmy Malone. Malone's a little too nosy to suit you......but he kept his wits when everything went haywire, when Dr. Rafkin's experiments on your moonstone sent the whole museum lab through a bizarre black moongate!
"Introduction"
Advertisement:

Worlds of Ultima: The Savage Empire is the first spinoff of the Ultima series by Origin Systems, using the Ultima VI engine. The same engine would later be used for Martian Dreams, and a third spinoff was planned about the Knights of the Round Table, but this was cancelled. All Worlds of Ultima spinoffs tell stories in separate worlds from Britannia, only tangentially related to the main Ultima continuity.

Ultima VI ends with the protagonist, the Avatar, in possession of a moonstone orb that can open portals to other locations. An unknown outside influence uses the orb to draw him into the Valley of Eodon, a lush prehistoric landscape populated with tribes plucked from various locations and times in Earth's history, and all are under attack from a hivemind of insects known as the myrmidex. It quickly becomes clear that the humans aren't going to get anywhere without cooperating, so it falls to the Avatar to persuade each individual tribe to support him in a shared strike against the insects. Obviously, the tribes aren't too eager to join unless you do something for them first.

Although Martian Dreams is more famous, Savage Empire already shows off the versatility of the engine, allowing you to use pretty much everything in the world. For example, you can get flax from a plant, use it on a loom to make cloth, use it with scissors to create cloth strips, and then dip these in a tar pool to create fuses for makeshift bombs.