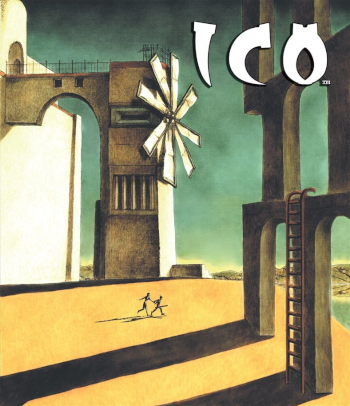 The island bathes in the sun's bright rays
Distant hills wear a shroud of grey
A lonely breeze whispers through the trees
Sole witness to history....
Advertisement:

ICO is a 2001 Action-Adventure PS2 game designed and directed by Fumito Ueda, who wanted to create a minimalist game around a "boy meets girl" concept. It is the first game in the Team ICO Series.

The team employed a "subtracting design" approach to reduce elements of gameplay that interfered with the game's setting and story, in order to create a high level of immersion. This means that the gameplay is realistic, with actions such as climbing, hitting things and making difficult jumps being limited to what a child would actually be capable of, and there is also no interface at all, with no inventory, minimap, life gauge, or stamina meter to remind you that you're playing a game.

The titular Ico is a young boy born with horns on his head, which his village considers a bad omen. Warriors lock Ico away in a sealed coffin within an abandoned castle. He escapes by chance, and while exploring his prison, Ico encounters Yorda, a mysterious young princess who speaks a strange language.

The goal of the game is to escape the castle with Yorda. While she is physically weak, locked doors in the castle open when she gets close enough, making her a living skeleton key. Her presence is also necessary to save the game, and some pressure plate puzzles require Yorda to open doors for Ico. This is where her utility ends, however: Yorda is unable to climb chains, lift, or fight anything, leaving the work involving dexterity or pointed sticks to Ico, who tries his best to keep her alive. Escaping the castle is complicated by the shadow creatures sent by the evil Queen, Yorda's mother. These creatures attempt to drag Yorda into their shadowy spawn points if Ico leaves her for any length of time, or if she just happens to enter basically any area of the castle, presumably because she was born unlucky. Ico can prevent this by beating the shadows with a stick or sword, and can also pull Yorda free if she is drawn into a vortex. While the shadow creatures cannot harm Ico, they can impede him in his attempt to keep Yorda from being taken away. The game practically revolves around the fact that she's a burden — on purpose, as the emotional bond that the gamer develops with Yorda grows and evolves over time because of this.

A novelization of the game, Ico: Castle in the Mist by Miyuki Miyabe, was released in Japan in 2004, with an English translation by Alexander O. Smith released in 2011. The original creator does not recognize it as canonical, but then again, he doesn't recognise his own interpretation as canonical, either - he encourages each player to come up with their own stories about what exactly is going on and how the game does or doesn't relate to Shadow of the Colossus.

Note that the game's title is always written in capital letters, but the character's name is not. Also, it is spelled "IKO" in katakana and thus pronounced "ee-ko", not "ai-ko" as Anglophone people might assume.

The novelization provides examples of the following:

Queen of the Misty Castle

Ico meets Yorda's mother for the first time, a malevolent sorceress who manipulates light and darkness to her evil whims. It is she who rules the decrepit castle that imprisons them both.

Queen of the Misty Castle

Ico meets Yorda's mother for the first time, a malevolent sorceress who manipulates light and darkness to her evil whims. It is she who rules the decrepit castle that imprisons them both.