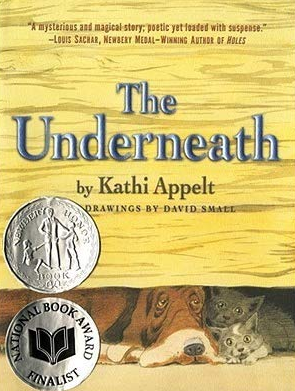 The Underneath is a 2008 novel by Kathi Appelt.

The book, loosely based on one of the author's own experiences, features an expecting calico cat mother who wanders off into a ramshackle house, having followed by the howls of an old, chained up hound. She befriends the dog, named Ranger, and has her kittens in the Underneath, a hideout under the porch of the house. She names them Puck and Sabine, and they are warned not to leave the Underneath.

Unfortunately, Puck does just that, and his overt curiosity provokes the attention of Gar-Face, the cruel hunter who resides in the ramshackle house.

Meanwhile, Grandmother Moccasin, a lamia, awakes after a thousand-year rest, and laments her past, involving her only daughter, Night Song, being lost to Hawk Man. All the while, her "brother", the Alligator King, is the prime target of Gar-Face

With themes of loss, love, and mystery, the book is filled with Tear Jerkers.