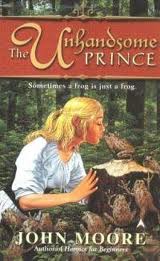 The Unhandsome Prince is a comedic fantasy novel of the Fractured Fairy Tale variety by John Moore. Like most of his fantasies, it's set in a place called "The Twenty Kingdoms", where fairy-tale rules always apply. In this case, in a kingdom called Melinower.

Caroline has spent months methodically sifting through the swamp to find that one frog who is a prince. After she finally kisses the right one, though, she's severely disappointed. Prince Hal isn't ugly or anything, but he's pretty geeky; hardly the sort of thing girls dream about. She knows her rights, and a beautiful girl who kisses the right frog is owed a handsome prince. It's the law.

Emily is the daughter and heir of the now-deceased witch who enchanted Prince Hal. Still an apprentice magic-user, she needs the magical things she inherited from her mother to have a chance of finding a first-rate magician willing to take her on. If she can't find an adequate prince for Caroline, though, she may be forced to sell it all in order to pay Caroline legal compensation.

Prince Hal is a nice guy, and smart, even if he's not a looker. He wants to help the girls, and he does have two older brothers who are both as handsome as anyone could ask for. Caroline's lack of a dowry may complicate matters, especially since his family is having money troubles, but Caroline is beautiful, so maybe something can be arranged. So together, the three set off for the capital.