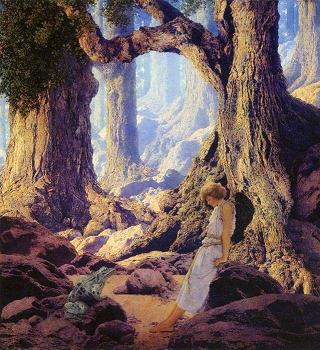 (also known as The Frog King or Iron Henry) is an old German fairy tale recorded by The Brothers Grimm.

The story begins when a young princess loses her golden ball down a well and a nearby frog offers to retrieve it for her. In return, however, he demands that she keep him near her as a close companion, and share her food, her drink, and her bed with him. The princess is repulsed by the frog, but, reasoning that he has no way to enforce the promise, agrees. The frog returns her ball, and she runs home without him.

Later that night, the frog appears at the castle, and the king insists on the princess keeping her promise to him. Come night-time, however, the princess refuses to let the frog sleep on her pillow, and angrily throws him against the wall. To her shock, what lands is a handsome (and very forgiving) prince, and the two of them fall in love and marry.

As they ride off into the sunset, they hear three loud cracks from outside the coach - it was the prince's faithful servant, Henry, who had had his heart bound with iron straps to keep it from breaking when the prince was enchanted. The cracking sounds were the bonds breaking as the man's heart swelled with happiness.

The iconic True Love's Kiss that replaces the act of violence in breaking the spell seems to be an artifact of translations into English, and has completely replaced the earlier versions in popular culture, even in Germany. The ending with the faithful servant is also frequently left out.

The princess's violence may be a throwback to other animal-bridegroom type stories — including frog prince ones — in which violent acts (such as beheading the animal or burning its skin) were the only way to break the spell. Removed from this context, though, it gives the story a Broken Aesop; the moral up until that point has been that you must keep your promises. In abusing the frog, the princess is breaking her promise with a vengeance, leading the reader to wonder why she deserves the handsome prince. Versions in which she kisses him avert this problem. Other folktale variants have the frog transform merely by sleeping in her bed— raising other issues when they are found together.

A more-encouraging reading of this story by Carol S. Pearson points out that the prince is only transformed after the princess becomes disgusted with the frog's behavior and hurls him against the wall or into the fire - suggesting his demands were *meant* to be offensive, in order to provoke this reaction. If the princess had done as her father expected, suppressed her real feelings, and meekly acquiesced to everything, the prince would have remained a frog. Only by recognizing his behavior is unacceptable, promise or no promise, can the curse finally be broken.

It is a wide-spread tale in Europe, with many variations on why she makes the promise: the frog may tell her how to carry water in a sieve (as ordered by her Wicked Stepmother), or let her get water from a well that will cure her mother.

The Distaff Counterpart The Frog Princess

is also a widespread tale. In the former USSR, the princess version is way more well known than the prince version. The Russian version also has a number of features: there, king's three sons shoot their bows randomly, and where the arrow falls, they'll find their wives. The younger son blindly shoots to the marshes, and as the Frog Princess finds his arrow, he has to marry her. Also, the Russian version does not end with frog's transformation back to a girl, but rather sets it as a starting point for more adventures.

A lesser-known Norwegian variant features trolls and other mythical beasts who punish the girl and send her on a quest for disobeying her enchanted animal companion. Contrast Persephone; and other fantastic-bridegroom myths, wherein the original aesop was made in part to help young women accept an Arranged Marriage to someone they may not like very much ("Don't worry what he looks like, sweetie, he'll be a good husband if you're a good wife.")