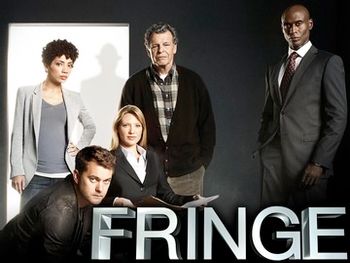 Anyone up for a root beer float?
"We create technology. How it is used is not our concern."
— Nina Sharp
Advertisement:

Fringe is a FOX Science Fiction TV series created by J. J. Abrams and his compatriots Alex Kurtzman and Roberto Orci. Other J.J. coworkers from Lost and Alias are involved as well. Conceptually, it is not unlike The X-Files, with the primary threat being Mad Scientist terrorists, instead of an Alien Invasion. In practice it is like The X-Files meets CSI. Like J.J.'s other shows, it has a slowly developing Myth Arc involving an Alternate Universe, mysterious "Observers," an Action Girl, and crazy, off-the-wall happenings right from the get-go. It's quite a Mind Screw.

WARNING: This page contains a large number of unmarked spoilers. Tropers new to Fringe proceed at your own risk. note Seriously, don't spoil yourself.