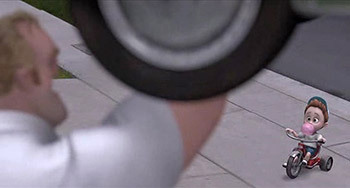 "He [Big Bird] can't get the courage to even start skating, at which point this little girl stares at him. Just stares. Stares at the sad, hollow shell of a bird he's become."
— Allison Pregler, reviewing Christmas Eve on Sesame Street
Advertisement:

Something unusual happens, and the camera pans out, revealing a small child staring intently at the subject in blank amazement. The context of this can vary widely. In romantic comedies, the staring children will be present any time the main couple argue or have an awkward romantic moment. In action movies, they can show up anytime something explodes or The Hero does something cool. This can be Played for Laughs by highlighting the absurdity of the moment, or Played for Drama to emphasize the horror of the event. It's sometimes accompanied by a "What are you looking at, kid?" or a dropped ice cream cone.

Using one of these is a good way to toy with breaking The Masquerade, since a child who reports seeing an unusual event may not be believed by adults.

If the child's staring is just a little too eerie for comfort, then it's a Creepy Child. May overlap with Deer in the Headlights and Things That Go "Bump" in the Night. Related to Innocent Bystander.