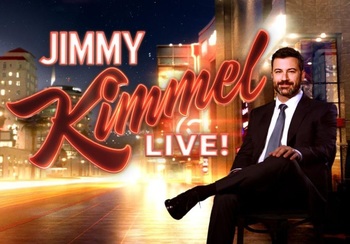 Jimmy Kimmel Live! is a late-night talk show aired by ABC, hosted by comedian Jimmy Kimmel. It premiered in 2003 as the network's first traditional, comedy-based late-night show since the 1980's, replacing its more news-based Politically Incorrect with Bill Maher (which aired from 1997 to 2003 on ABC after moving from Comedy Central).

It follows a similar format to other late-night comedy shows, with a monologue, sketches, celebrity interviews, and music performances. In contrast to his competitors at the time, David Letterman and Jay Leno, Kimmel was younger when he debuted (he was only in his thirties, while Leno and Letterman were in their fifties), and the show actually was broadcast live until 2004, when an incident with Thomas Jane prompted the show to go back to a taped format. Additionally, the show was broadcast at midnight ET/PT rather than 11:35 p.m. like its main competitors, as ABC initially maintained its long-running late-night news program Nightline in said timeslot. However, in 2013, Kimmel switched places and moved to 11:35 (with Nightline as a lead-out instead).

Starting out as a quirky alternative to the old guard, it has since been able to hold its own, and has received viral attention for some of its sketches and recurring segments, such as "Mean Tweets", and his video challenges (including the annual "I Told My Kids I Ate All Their Halloween Candy" prank compilation). Given the subsequent retirement of Leno, Letterman, and Jon Stewart, Kimmel has had the longest tenure hosting a single show out of all current late-night hosts in the U.S.,note Conan O'Brien is the longest-working of all current late-night talk show hosts in the United States, but his tenure is divided between Late Night with Conan O'Brien, his brief tenure hosting The Tonight Show with Conan O'Brien, and Conan and can be considered an Ur-Example of the style of current late-night hosts such as Jimmy Fallon and James Corden, whose shows cater to young adult viewers and aim to have their best material become viral hits online.

Kimmel has infrequently aired special editions of the show to accompany special events broadcast by ABC; it premiered after the Alias lead-out for Super Bowl XXXVII, and has aired shortened pre-game (well, in the East. It's airs after the game in the west) editions prior to each game of the NBA Finals, typically featuring basketball-related sketches and guests. It also aired episodes after the Oscars, but this ended in 2017 when Kimmel began a two-year stint of actually hosting them (in 2017, ABC aired a post-show with Anthony Anderson and Lara Spencer in the late-night slot following the show. The following year, they began airing sneak peeks of upcoming series instead).

"Apologies to Matt Damon, we ran out of time. Goodnight!"
Feedback