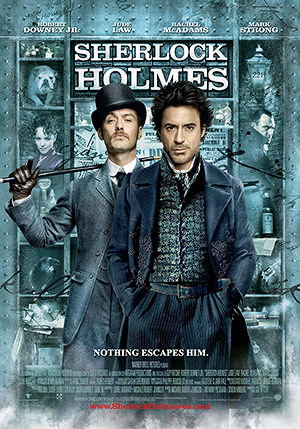 "Death... is only the beginning."
Irene Adler: Why are you always so suspicious?
Sherlock: Should I answer chronologically or alphabetically?
Advertisement:

A 2009 film directed by Guy Ritchie, and starring Robert Downey Jr., Jude Law, Rachel McAdams, and Mark Strong, based on the Sherlock Holmes stories that updates (or maybe restores) Holmes and Watson as thinking men of action, with the addition of some modern blockbuster tropes and a zany Hans Zimmer soundtrack.

When Holmes (Downey) and Watson (Law) interrupt a dark occult ritual and save a woman from being sacrificed, they find that the culprit is Lord Henry Blackwood (Strong). He's already killed five women in a similar manner and, before he is hanged, he claims to Holmes that he will kill three more times after his death.

Soon, Blackwood's tomb is found destroyed and his body is missing, sparking rumors that he has risen from the dead. Holmes has other problems, as well: Watson is getting married and is moving out, making the Blackwood case their last case together, and Irene Adler has shown up to hire Holmes for her mysterious employer.

A sequel in 2011 titled Sherlock Holmes: A Game of Shadows introduces Professor James Moriarty, a mathematician, former boxer and criminal mastermind behind a web of mysterious deaths and terrorist attacks across Europe. Holmes sets out to find out what he's up to but discovers Moriarty's mind is a match for his own, and a battle of wits across the continent begins as the two try to outsmart each other.

The long-delayed third film is to be directed by Dexter Fletcher, though not much has moved forward on it yet.

Example of:
David Versus Goliath