Film / The Secret in Their Eyes 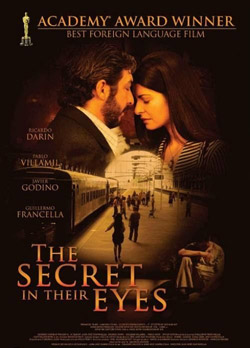 The Secret in Their Eyes (El secreto de sus ojos) is a 2009 Argentine film directed by Juan José Campanella.

Benjamin Esposito, a federal justice agent, becomes entranced by a rape-murder case in Buenos Aires, and tries to solve it even after case is closed, with help from his alcoholic coworker Sandoval, his new boss (and love interest) Irene Hastings, and Ricardo, the victim's husband. The film alternates between the time of the crime (1974-75) and Esposito's reminiscing of the story in the turn of the century (1999-2000).

The film won the Academy Award for Best Foreign Film, beating out The White Ribbon from Germany, A Prophet from France, Ajami from Israel and The Milk of Sorrow from Peru.

An English-language remake, written and directed by Billy Ray and starring Chiwetel Ejiofor, Nicole Kidman, and Julia Roberts, was released in 2015.