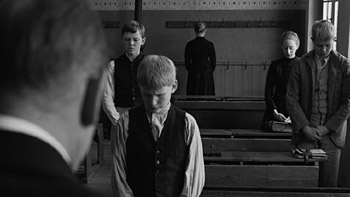 "But I believe I must tell of the strange events that occurred in our village, because they may cast a new light on some of the goings-on in this country."
— Narrator

The White Ribbon (Das Weiße Band - Eine Kindergeschichte) is a 2009 German Drama/Mystery film by Michael Haneke. Strange events happen in a small village in the north of Germany during the years just before World War I, which seem to be ritual punishment. The abused and suppressed children of the villagers seem to be at the heart of this mystery.