Nada te preparó para esto.Translation Nothing prepared you for this.
—Tagline 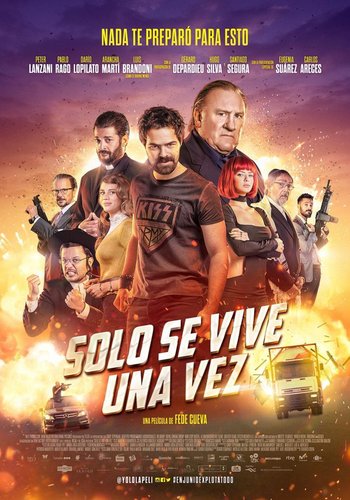 Sólo se vive una vezTranslation You only live once is an Argentine-Spanish action satire from 2017 directed by Federico Cueva, starring Peter Lanzani, Gérard Depardieu and Santiago Segura, and featuring KISS's song "I Was Made For Lovin' You".

After bearing witness to shady business between a corrupt businessman (Depardieu) and Sergio Peña, a food engineer and maker of a preservative formula (and the murder of the latter), as well as taking their contract, Leonardo Andrade (Lanzani) finds himself pursued by Duges Laboratories and, in an attempt to hide from them, takes on the guise of a Jew. However, on his way, he's confused for one going to an annual reunion, and ends up hiding in their temple. There, he meets rabbi Mendi, Sara and Yosi, and begins his days as Shalom the Jew. Later, when he goes to ask for help from his neglecting brother Agustín at the church he works at, Duges' men come and take him away, and it's up to Leo, Yosi and Sara to get him back.