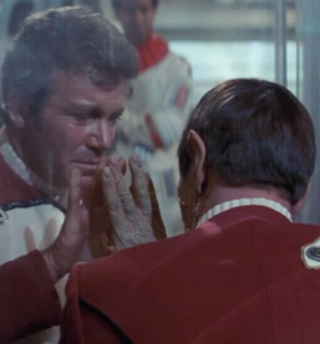 People are separated by glass: a window, a door, the Plexiglass barriers they have in the visiting rooms of a prison, whatever. They can't touch, so they place their hands on opposite sides of the glass in a gesture of wordless comfort.

A little bit trickier, but also possible, with an opaque barrier.

This can also cover kisses or other attempts to touch through a barrier. See also Separated by the Wall.

Has nothing to do with falling in love with Microsoft Windows or an actual window.