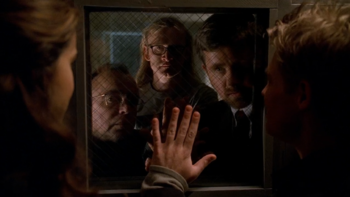 "And those who fight the good fight, don't always win."
Written by Vince Gilligan, John Shiban & Frank Spotnitz
Directed by Cliff Bole
"This virus, once it's airborne, its kill radius is five or six miles, depending on the winds. Potentially, it could kill thousands. Tens of thousands."
— Yves Adele Harlow
Advertisement:

After receiving information that their colleague Yves Adele Harlow (introduced in The Lone Gunmen spin-off) may be one of the super soldiers, the Lone Gunmen investigate and find a conspiracy involving biological weapons based on shark organs.

"It means that they're gone... but they live on through us all."