Separated by the Wall 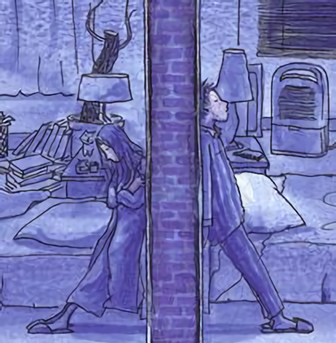 A stock visual metaphor, if you will. Some people (usually a man and woman pair) are separated by a wall, window, or other barrier. The wall is obviously an obstacle, but not the whole of the obstacle; the couple is prevented from uniting by some other means which the wall represents, either a physical cage or cell of some sort, or some form of emotional separation, like a relationship problem.
Advertisement:

In order to make the best of this image, the couple will often press their heads against the same spot of the wall, on opposite ends, and the camera will move around the set to show that they are physically very near to each other, but still incapable of touching. If the couple is lucky, they will have a small hole or window to communicate through.

Not to be confused with any variation of the Fourth Wall.

See Closed Door Rapport for when one party tries to talk to the other after being shut out. See also Window Love, where parties are separated another physical barriers, and Tragic Intangibility, where a character is too metaphysical to touch and it's sad.