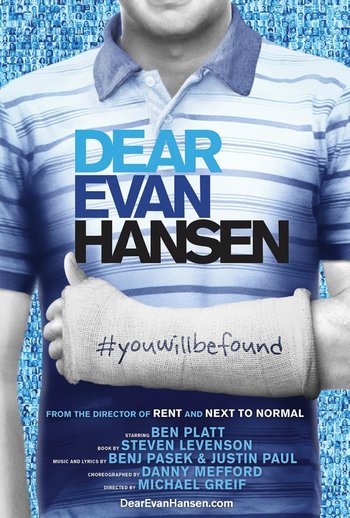 Dear Evan Hansen is an original musical written by the composer-lyricist team Benj Pasek and Justin Paul, with the book by Steven Levenson. It opened on Broadway on December 4, 2016, after its world premiere at Arena Stage in 2015, and an Off-Broadway production at Second Stage from March to May 2016.

The musical focuses on teenager Evan Hansen, who suffers from a social anxiety disorder. After the suicide of fellow student Connor Murphy, a series of events land Evan in the center of a false narrative - that he was Connor's secret best friend. As Evan is thrust deeper into a web of lies, he gains everything he's ever wanted — a chance to belong. He becomes a beacon of hope for Connor's grieving family — only to witness everything unravel around him. In the end, he must face a harsh truth: even the best of intentions can become harmful.

The musical has received widespread critical acclaim for its music, story, and performances of its original cast, headlined by Ben Platt as Evan Hansen. A novelization was published in 2018, not long before Universal announced their plans for a film adaptation, which was eventually released in 2021 with Platt reprising his role as Evan.