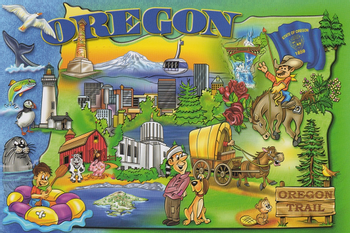 "Look, we get it, Oregon, you people live in a cartoon."

"We want you to visit our State of Excitement often. Come again and again. But for heaven's sake, don't move here to live."
— Gov. Tom McCall, 1971
Advertisement:

In the olden days, where pioneers on the Oregon Trail were trying to get to. In more modern times, the land of hippies and environmentalism.

The name "Oregon" comes from an archaic name for the Columbia River, which divides Oregon and Washington. Whatever you do, don't pronounce "Oregon" as "or-e-gone" anywhere near where a local can hear you. It's pronounced "or-ih-gun" or "organ". In addition to Washington, it also borders the Pacific Ocean to the west, California to the south, and Idaho to the east.

Native Americans have inhabited the area of present-day Oregon since at least 15,000 years ago. One of the first notable events in Oregon's history occurred around 5677 BC. That was when the supervolcano Mount Mazama collapsed in on itself. The resulting caldera gradually filled with rainwater and became Crater Lake, the deepest lake in the U.S. The Klamath Indians may have witnessed this event, as their legends speak of Crater Lake being formed when a mountain was destroyed in a battle between their gods.

The first white person to sight the Oregonian coast was Portuguese explorer Juan Rodríguez Cabrillo in 1543. In the following centuries, more European explorers would arrive in Oregon, either coming up from Spanish California or via the Pacific. Generally, they were searching for the Northwest Passage, a sea route through North America to speed up trade with Asia.note It turned out that the Northwest Passage didn't exist...yet. It wasn't until 2009 that enough Arctic sea ice melted to open the passage sufficiently for ships to sail through. Amongst the more notable of them were British captains James Cook (yes, that James Cook) and George Vancouver. Following The American Revolution, Captain Robert Gray became the first U.S. explorer to visit Oregon, where he named the Columbia River after his ship.

With the purchase of the Louisiana Territory in 1803, the United States now had a border with the disputed land of Oregon, which by that time was already claimed by Britain, Spain, and Russia. Of course, the U.S. couldn't resist throwing its hat into the ring. With the decline of the Spanish Empire as well as the expansion westwards of the U.S. and British Canada, the dispute over Oregon effectively became a dispute between the United States and the British Empire. In the Treaty of 1818, it was decided that Oregon would, at least for the time being, be jointly occupied by the U.S. and Britain.

In 1805, the Lewis and Clark Expedition reached Oregon overland from the east coast. Lewis and Clark reached the Pacific near present-day Astoria, now known as the setting of The Goonies and Free Willy, and spent the winter there before beginning their journey back east in the spring of 1806. This was part of the Dawn of the Wild West, as Lewis and Clark's route would go on to lay the foundation for parts of the Oregon Trail. The Oregon Trail itself was established by mountain men in the 1830s and was widely publicized by 1843. Much river fording, dying of dysentery, and only being able to carry back 100 pounds of meat ensued.

With the rising popularity of the idea of Manifest Destiny, the American people decided to elect James K. Polk in 1844. War hawks were screaming "fifty-four forty or fight", which would have given the U.S. half of present-day British Columbia, including all of Vancouver Island and the modern city of Vancouver. With the backing of his party, Polk threatened war with Britain but ultimately proved willing to compromise. The border was drawn at the forty-ninth parallel, with the land to the north becoming British Columbia. The land to the south became the Oregon Territory, which comprised present-day Washington, Oregon, and Idaho. Polk's war hawk supporters were disappointed that the issue was resolved without them getting to shoot at anyone, but Polk proceeded to go to war with Mexico so it all worked out.note This caused great suspicion among Northerners, since Polk was willing to fight for territory where slavery could be expanded under the Missouri Compromise, but not for territory where it couldn't. This might well have been a factor in his decisions, but Mexico being a much less formidable enemy than Britain was probably more important.

With Oregon now firmly in U.S. hands, the Oregon Trail continued. Portland was founded in 1845 and was not initially considered important. Oregon Trail pioneers regarded Portland as a town to pass through on their way to more important places like Oregon City. Oregon filled up with settlers so fast that it became a state in 1859, with the Oregon Trail still at its height. In 1869, the transcontinental railroad was completed, providing easier transport to the west coast and eliminating the need for the Oregon Trail. In the late 19th century, Portland rose in influence due to its strategic location at the confluence of the Columbia and Willamette Rivers. Oregon City still exists, by the way, but now it's the one that's irrelevant.

Following the 19th century, Oregonian history becomes rather dull. The most exciting thing to happen to Oregon in the 20th century was the Lookout Air Raids, which was the only attack by Imperial Japan on the contiguous U.S. during World War II. A total of six people were killed. Nowadays, Oregon is known for its left-wing, green politics. Rural parts of the state tend to be as right-wing as it gets, but the left-leaning urban areas always outvote them anyway - fully 50% of the state's population lives in metro Portland, and Eugene/Springfield and Bend account for another 25% or so between them, so the sort of good ol' boy tricks seen in the South and Midwest to gerrymander the cities out of political relevance are overwhelmed by sheer numbers. Put another way, a good 70% of Oregon's population is concentrated in the Willamette Valley to the west of the Cascades which contains all the above-mentioned cities except for Bend which is in central Oregon.

Along with New Jersey it's long been one of two states to outlaw self-service gas. A 2018 law allowing it under limited circumstances (customers can now pump their own gas only at stand-alone gas stations in counties with fewer than 40,000 residents) led to the sort of public freakout that was a true headscratcher to those in the other 48 states where self-serve has been the norm since The '70s, to the extent that full-service gas stations are now seen as outright strange in most states.

The state is divided into four main areas:

◊ Willamette Valley, Coast, Eastern Oregon, and Southern Valleys. All of the rivers in the Willamette Valley, and most in Eastern Oregon, eventually flow into the Columbia and from there to the Pacific Ocean. Rivers in the Coastal Region and Southern Valleys flow directly to the Pacific. A decent-sized chunk of Eastern Oregon is in the Great Basin, a series of basins with one thing in common—none of their rivers flow into any ocean.note With the occasional exception of the Goose Lake basin, which historically flowed into California's Pit River, in turn draining into San Francisco Bay through the Sacramento River. Due to water diversions in modern times, the lake now only flows into the Pit River during rare high water events.