Dawn of the Wild West 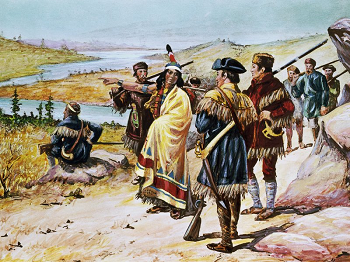 Sub-trope of The Western, Dawn of the Wild West involves stories set in the western part of North America between the late 1700s and the 1840s which was a time of continental exploration (e.g., Lewis and Clark), fur trapping, trailblazing, and westward expansion.

In stories covered by this trope, you'll usually encounter bold explorers, mountain men, missionaries, and Native Americans. The latter's depiction will vary considerably and be often colored by the attitudes from the time the work was produced.

There are also stories about pioneers under this trope but their efforts to settle and civilize the "savage" land often involve wilderness that's east of the Mississippi. Stories about pioneers moving into the Far West (i.e., the North American Great Plains and territory west of the Rockies) signify the end of the time period covered under Dawn of the Wild West trope (i.e., the early 1840s).

In addition, this trope covers works about the Battle of the Alamo and the Texas War for Independence.

As indicated in the title, this trope covers the beginning of the period covered in the Wild West and represents the Dawn of an Era. It's the opposite of Twilight of the Old West which covers the End of an Age for the Wild West.