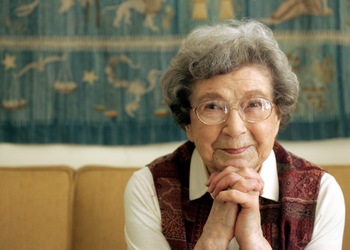 "Children should learn that reading is pleasure, not just something that teachers make you do in school."
Advertisement:

Her largest and best-known collection of books (too loose-knit to be really a "series", although there is a chronological order) involves a group of children in Portland, Oregon (where Cleary herself grew up), including Henry Huggins and his dog Ribsy, Henry's friend Beatrice "Beezus" Quimby and her little sister Ramona, and Ramona's friend Howie Kemp. Ramona is the break-out star character of the series. They were adapted into a TV series in the 1980s (called Ramona), and a movie (called Ramona and Beezus) was released in 2010.

Another well-known series by Beverly Cleary begins with The Mouse and the Motorcycle, about a mouse who befriends a lonely boy and discovers a useful but never-quite-explained ability to drive toy vehicles as if they were real.

Part of what makes the books work so well is the portrayal of various events that are a huge deal to a child. Cleary's insight into the minds of children also creates a large cast of very realistic characters easy for both children and adults to relate to.

Her birthday, April 12th, is designated as "Drop Everything and Read Day" (DEAR, as introduced in Ramona Quimby, Age 8) in American elementary schools, in which lessons stop and the students simply read whatever they want silently.

Cleary lived to be 104 years old. When asked, on her 100th birthday, if she had any tips for such longevity, she simply said, "I didn't do it on purpose."

Works by Beverly Cleary with their own trope pages include: