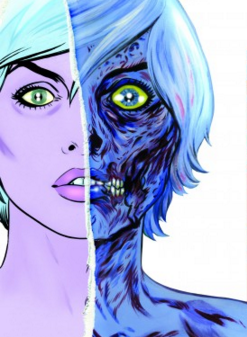 "Come on in and meet the dead guy who'll be crowding my head for the next week."
— Gwen
Advertisement:

iZOMBIE is a Vertigo Comics ongoing series about Gwen Dylan, a woman brought back from the dead for mysterious reasons. The series started in July, 2010. Set in Eugene, Oregon, Gwen has to face a preponderance of supernatural threats alongside her twentysomething life. Drawn by Madman author Mike Allred and written by Chris Roberson.

The series ended in 2012 due to Vertigo canceling the comic, but giving the story enough lead time to close out properly. The CW created a iZombie TV series, very loosely based on the comic. Rose McIver is the lead character, and Rob Thomas is showrunner.