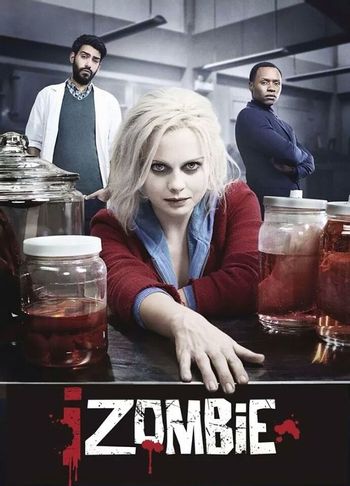 Kicking ass and taking brains.
"Hmm, so 'you are what you eat' isn't just a bitchy thing my mother says about fat people."
— Liv
Advertisement:

A crime/black comedy show that began airing in 2015 on The CW, loosely based on the Chris Roberson-Mike Allred Vertigo Comics series iZOMBIE and executive produced by Rob Thomas and Diane Ruggiero-Wright.

Olivia "Liv" Moore is a young, upwardly-mobile go-getter who has it all. She's pretty, perky, has a hot fiance, and is on the fast track to becoming a heart surgeon.

That is, until she got scratched by a zombie in the middle of an outbreak and became undead. Now she's a zombie, who has to eat brains to stay intelligent and civilized. Instead of continuing as a surgical resident, now she works in the morgue. And since her need to eat brains comes with the side effect of picking up some of the...er..."brain donor's" memories and skills, she also helps a detective solve their murders.

Stars Rose McIver as Liv Moore, Rahul Kohli as Dr. Ravi Chakrabarti, Malcolm Goodwin as Detective Clive Babineaux, Robert Buckley as Major Lilywhite (Liv's former fiance), David Anders as Blaine DeBeers. Alyson Michalka portrays Peyton Charles (Liv's best friend, and love interest to both Ravi and Blaine) in a recurring capacity in the first two seasons, and as a series regular onward. Robert Knepper portrayed Angus McDonough (Blaine's father) in a recurring capacity in the second and third seasons, and was a series regular for the fourth season only.

Tropes for single episodes can go in the appropriate recap page.