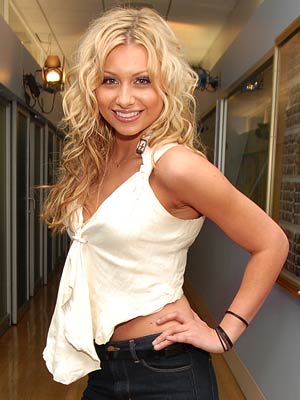 She'll have you Walking on Sunshine.
Advertisement:

Alyson Renae "Aly" Michalka (born March 25, 1989 in Torrance, California), often credited as Aly, is an American singer-songwriter, musician, and actor. Michalka gained fame for playing the role of Marti Perkins in the CW cheer leading television drama Hellcats. She was also known for her roles as Keely Teslow in the Disney Channel original series Phil of the Future, Charlotte Barnes in the film Bandslam, Taylor Callum in the Disney Channel Original Movie Cow Belles, Rhiannon Abernathy in the Golden Globe-nominated teen film Easy A and as Tracy Morgan in the thriller, The Roommate. She is also known as one-half of the musical duo Aly & A.J. (formerly 78violet) with her sister Amanda. She's later had a recurring role on CW's iZombie.