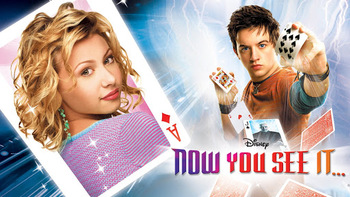 Now You See It... is a Disney Channel Original Movie starring Alyson Michalka as Allison, a teenage girl with a fascination for mystery solving and the dream to become a television producer. She takes part as a teenage producer for a new reality show, which looks for the world's best kid magician, and ends up working with Danny Sinclair- a moody outcast who just so happens to be a very talented magician. Weird things happen whenever Danny is around, however, and it starts to become apparent his magic tricks might not be tricks at all...

Not to be confused with the game show, Now You See It, nor with that other magician-centric film, Now You See Me.