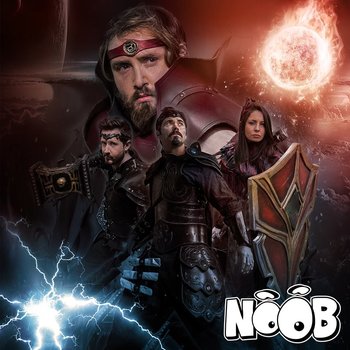 They are going to do this as team! Actually working as one may be another story...
Advertisement:

Noob: La croisée des destins (2017) is the sequel to Noob: La Quête Légendaire and the last entry in the Noob movie trilogy. It was released in Febuary 2017.

Having collected the materials to make the only weapons that can prevent The End of the World as We Know It in the Fictional Video Game world of Olydri, Gaea, Sparadrap and Omega Zell now need to get them crafted and use them to fight a powerful world boss controlled by their former shared guild master Arthéon. However, their temporary parting to get the weapons crafted shows that that despite their current respective successes, the very flaws that prevented them to from working as team when they were guildmates and drove Arthéon away in the first place are still present.

In addition to Arthéon, various antagonists, both among players and Non Player Characters, are on the last leg of their respective plans, some of which are enough of a threat on their own to require Godzilla Threshold measures.