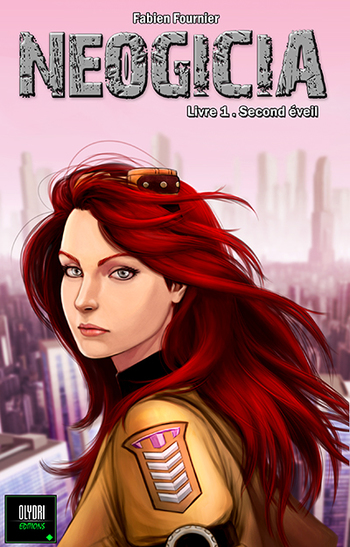 The Origin Story of one of the Empire's heroes
Advertisement:

Néogicia is a Spin-Off of the French Noob franchise. The parent franchise is centered around a fictional MMORPG named Horizon, that has its own Non-Player Characters and is set in a world named Olydri. In Néogicia, Olydri is the real world and its inhabitants living and breathing people.

The work focuses on the Empire, the technology side of The Magic Versus Technology War and the faction in which the Noob protagonists are playing. One of the faction's trademarks is neomancers ("néogiciens" in the original French version), people who underwent Bio-Augmentation that enhances greatly their physical and mental capabilities at the price of cutting them off from the world's magic system and can transmit the feature to their children. The story is told from the First-Person Perspective of Saly Asigar, a young woman who decides to become a neomancers. When the procedure has unsual results, Emperor Keynn Lucans get her enrolled into Memoria, the prestigious academy for neomancers that he founded.

There is Comic-Book Adaptation as well. As of 2016, there are two books.