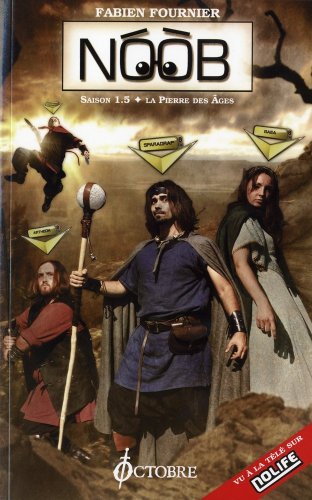 The novels from the eponymous web/TV series, that were the first step towards making Noob a multimedia franchise. Each novel takes place between two of the webseries seasons, that being also the time at which Fabien Fournier, the creator of the series, wrote them.

The story follows a MMORPG guild that plays the Fictional Video Game Horizon, with an upcoming or recent update of the game's universe as a frequent driver of the plot. Said guild is however a Ragtag Bunch of Misfits that only stays together because Horizon's too extreme Socialization Bonus keeps anyone from playing alone and has to put up with an actual Noob that happens to be their healer. While still centered around the Noob guild, the novels are the medium that paints the most complete picture of Olydri, the world in which Horizon takes place. They notably introduce elements and non-player characters that were later used in spin-offs such as Neogicia.

The novels are written as if they were The Movie to the preceding season from the series and tend to turn into an Prolonged Prologue for the following one, yet come together as a storyline that is both independent and complementary to the series.The character sheet is shared with the other media.

The Noob novels provide examples of: