The Magic Versus Technology War 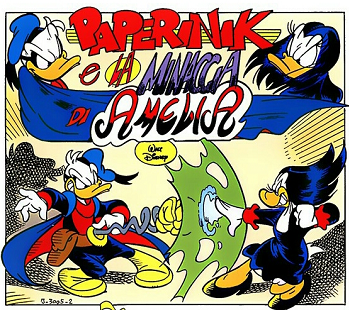 Thomas: Did you know they don't even have cell phones?
Thomas' Friend: Do they even know what a phone really is?
Atsuko Kagari: You guys are the ones who are behind the times, not knowing how amazing magic is! We can do so many things; it's way cooler than your cell phones!
— Little Witch Academia: The Enchanted Parade

In traditional fantasy, the available technology (as opposed to magic that just works like technology) is generally depicted as being relatively primitive, roughly equivalent to Real Life sometime prior to the development of modern firearms. In Science Fiction, just about anything, from the paranormal to the supernatural to Sufficiently Advanced Aliens with technology that acts like magic is allowed, except magic. In the rare fiction where magic and advanced technology exist in the same universe, they rarely get along. In some cases, they merely interfere with each other for unexplained reasons. Sometimes it actually comes to blows, and that's where this trope comes in.

To be this trope, a series needs to have as one of the primary conflicts, an actual shooting war between a faction upholding magic and a faction upholding advanced technology and science. Typically one side is using magic spells, cavalry on dragons, etc., and another that prefers technological weapons like guns, tanks, Humongous Mecha, etc. Note that "Advanced Technology and Science" is a relative term. It may be as little as Industrial Revolution-era (compared to the standard Medieval European Fantasy), or even higher than modern times. A good rule of thumb is at least one "age" of technological development over that of the Magic-using civilization. The distinction will be made a lot more clear if the scientific principles are explained and comprehensible enough, if still unrealistic to contrast with the completely alien principles of magic that allow things to happen based on intent.

Sometimes the science side loses the war or destroys itself, in which case it nearly always features as a lost civilization, leaving behind the ruins of at least one Advanced Ancient Acropolis filled with Lost Technology, Superweapons, and Deathtraps.

Often tied to a Masquerade. The war could be the result of The Unmasqued World; the Masquerade can serve to protect an Endangered Species or avert a Genocide Dilemma. Expect to see a Corrupt Corporate Executive, Evil Sorcerer, Mad Scientist or Wicked Witch. Compare: Science Is Bad, Magic Is Evil