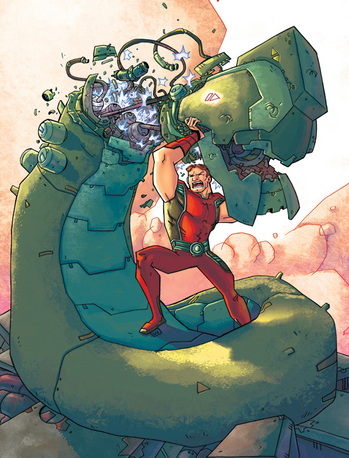 "Look at you, hacker. A pathetic creature of meat and bones, panting and sweating as you run through my corridors. How can you challenge a perfect, immortal machine?"
— Shodan, System Shock
Advertisement:

Ladies and Germs, in this corner, we have a man. A pathetic pile of a meatbag, with skin completely incapable of preventing major lacerations. Loaded with pain receptacles that will severely dampen his ability to keep up in an environment where the hurt will lay into them endlessly and mercilessly. Only the human spirit can give this pathetic creature any hope for survival.

And in this corner, we have the automaton. Perfect in every conceivable way, invulnerable to the wear and tear so common in humans, working tirelessly as long as it can maintain a power source. The machine has no sense of remorse or mercy and will do whatever is commanded of it to the bitter end. Alas, the machine lacks one thing — Love.

Who will win? Well, that's a question for the plot. Given that good guys almost always succeed, bet on that horse first — but more often than not it's the human we're supposed to be rooting for. Since God help us if the robot revolution comes and they really are better than us.

Interestingly, the machines will sometime be said to "never get ill" and "never age". If that were true, there would be no need for repairmen nor scrapyards. This generally gets a pass because a machine sufficiently advanced to challenge man would by definition be capable of self-maintenance and, likely, self-improvement to the point it would outlast anything built by man.

See Rock Beats Laser for this concept applied more broadly to technological disparities in general. This trope is concerned primarily with the struggle of human characters against robots specifically.

An often necessary part of the Robot War.

In the game mode "Mann vs. Machine", the RED Team is tasked with defending Mann Co. against an army of robotic Evil Knockoffs of the nine mercenaries created by Grey Mann.

In the game mode "Mann vs. Machine", the RED Team is tasked with defending Mann Co. against an army of robotic Evil Knockoffs of the nine mercenaries created by Grey Mann.