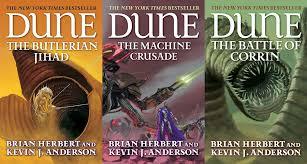 Everything in the universe contains flaws, ourselves included. Even God does not attempt perfection in His creations. Only humankind has such foolish arrogance.
— Cogitor Kwyna - Dune: The Butlerian Jihad

The Legends of Dune trilogy is a set of prequels set in the Dune universe, set during the Butlerian Jihad that was mentioned frequently in the original series, mostly in the context of a prohibition on technology. The story follows a human-machine conflict with humans as part of a 'League of Nobles' versus a sapient computer Omnius that has control of a machine empire. The Legends of Dune series is written by Frank Herbert's son Brian Herbert (Managing Partner of Herbert Properties LLC, the holder of Frank Herbert's intellectual property) and Kevin J. Anderson.

The story establishes the major families that we come to know in Frank Herbert's original Dune series, including the Atreides, Harkonnens, and Corrinos (the Butler family, which later changes its name). The events in this trilogy also setup for the author's attempt at a conclusion to the original series, Hunters of Dune and Sandworms of Dune.

The trilogy also plants the seeds regarding the great schools of the Dune universe, including sub-plots that lead to the formation of the Bene Gesserit sisterhood, Spacing Guild, Suk Institute and the Order of Mentats, the great schools are the focus of a subsequent sequel trilogy Great Schools of Dune set after an eighty-year Time Skip from the Legends series.

The Legends of Dune series consists of:

The Legends of Dune trilogy contains examples of: