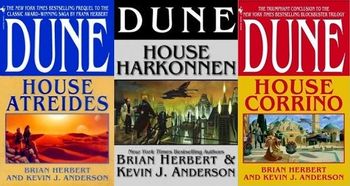 Like many culinary delicacies, revenge is a dish best savored slowly, after long and delicate preparation.
— The Padishah Emperor

The Prelude to Dune series is a prequel trilogy to the popular Dune Chronicles by Frank Herbert. The trilogy was the first outing of Frank's son Brian Herbert and his writing partner Kevin J. Anderson.

The story sets up the tension between Duke Leto and Shaddam, despite personal like, the events set Duke Leto up as a much stronger and popular political leader in the Landsraad than Shaddam himself, creating part of the perceived threat that later creates common cause between Corrino and Harkonnen.

The Prelude to Dune trilogy contains examples of: