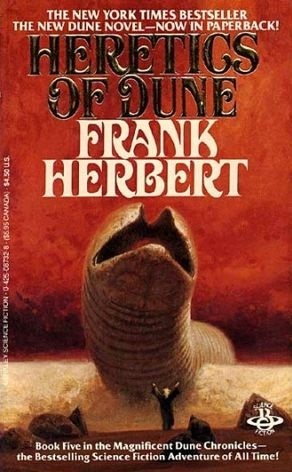 Some people never observe anything. Life just happens to them. They get by on little more than a kind of dumb persistence, and they resist with anger and resentment anything that might lift them out of that false serenity.
— Mother Superior Taraza
Advertisement:

Heretics of Dune is the fifth installment of Frank Herbert's award-winning Dune Chronicles. Published in 1984 by Putnam, Heretics of Dune was a New York Times Best-seller the same year.

Heretics of Dune is set 1,500 years after the events of God-Emperor of Dune. The death of the God-Emperor led to a long famine in the Old Imperium. Spice and other commodities became scarce in the aftermath and humanity, free from the grip of Leto's control, spread out into the Scattering. In the present time, the Bene Gesserit are the main organizing force in the Old Imperium, forced out of the shadows and into governing directly. The Tleilaxu are the other major power in the Imperium, having developed not only a method to produce artificial Spice in vast quantities, but also enhanced Face Dancers capable of duplicating both the likeness and persona of their victims. The Spacing Guild has mainly been side-lined with the advent of Ixian navigation machines.

Creeping back into the old Imperium from the outskirts of the Scattering are the Honored Matres, a hyper-sexual sisterhood that dominates through sex and violence. They greatly outnumber the Bene Gesserit and begin to storm the old Imperium. Meanwhile on Rakis (formerly Arrakis or Dune), a girl has been discovered that can control the sandworms. The Bene Gesserit have engaged in an ambitious project to utilize the girl, Sheeana, to their own ends. To aid their efforts to control Sheeana, the sisterhood has commissioned a new Duncan Idaho ghola from the Tleilaxu, though the Tleilaxu are playing their own game. Training Duncan for his role are Reverend Mother Lucilla and retired Supreme Bashar Miles Teg, the former commander of the Bene Gesserit military. Reverend Mother Superior Taraza meanwhile coordinates the events, with Reverend Mother Darwi Odrade as her representative on Rakis.

Which of the major powers will survive? Will the new Honored Matre sisterhood come to dominate the old Imperium? How does Sheeana control the worms and what role does she play in humanity's future?

Heretics of Dune contains examples of: