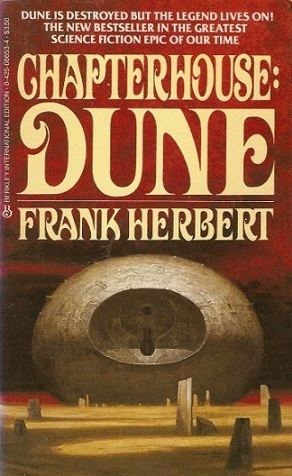 Give me the judgment of balanced minds in preference to laws every time. Codes and manuals create patterned behavior. All patterned behavior tends to go unquestioned, gathering destructive momentum.
— Darwi Odrade

Chapterhouse: Dune is the sixth and final installment in Frank Herbert's Dune Chronicles. It was published in 1985 by Putnam and rose to #2 on the New York Times Bestseller List.

Chapterhouse: Dune continues shortly after the events of Heretics of Dune. The Honored Matres have overrun the Old Imperium and destroyed all Tleilaxu worlds and the planet Rakis, cutting off the supply of the precious Spice. With the Bene Gesserit forced to flee at every turn, Mother Superior Darwi Odrade is fighting for time to put her plan to save the sisterhood and the Imperium in motion.

On Chapterhouse, the last remaining sandworm has begun the Spice cycle anew, turning the once lush and fertile world into desert. In addition, the sisterhood has the last remaining Tleilaxu Master, Scytale, in their possession, giving them the technology of the Axolotl tanks in order to make both gholas and artificial spice. Odrade chooses to use this technology to restore Miles Teg to lead the sisterhood into combat. Odrade and her inner-circle deduce that the Honored Matres are on the run from something even worse out in the Scattering.

The Honored Matre Murbella, brought back to Chapterhouse, trains as a Bene Gesserit. Duncan Idaho, locked in the no-ship in order to avoid prescient detection, continues his relationship with Murbella and serves the sisterhood as Mentat abd weapons master. Duncan has several odd visions and dreams of alien technologies and an elderly couple watching from afar. Sheeana also continues her training and initiation into the sisterhood, where the Missionaria has plans for her.

Will Odrade's plan come to fruition in time to save the Bene Gesserit sisterhood? Who are the Honored Matres and why have they returned from the Scattering? Who does Duncan keep seeing in his visions and what do they want?

Note: Chapterhouse: Dune has an open ending, leaving many of the plot points introduced in Heretics and in Chapterhouse unresolved. Frank Herbert died shortly after publication, but 15 years after Chapterhouse: Dune was published Frank's son Brian announced that he had found plans for "Dune 7", which culminated in Hunters of Dune and Sandworms of Dune written by Brian Herbert and
Advertisement:
Kevin J. Anderson. Some fans however still insist that either the notes for 'Dune 7' don't exist or that the authors didn't follow them.