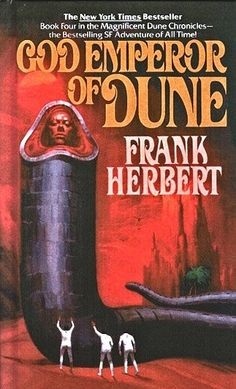 God Emperor of Dune skips 3500 years from Children of Dune. Leto II is ruler of the Imperium and has continued the metamorphosis he started in Children of Dune, greatly enhancing his life-span and making him Nigh-Invulnerable. Leto's awareness greatly surpasses even his father's and he had an iron grip on all aspects of life in his empire in order to ensure humanity's continued survival via the 'Golden Path'. Leto has commandeered the Bene Gesserit breeding program for his own purposes, culminating in Siona Atreides, a rebellious girl who is invisible to even Leto's oracular vision. Siona is the daughter of Moneo, Leto's majordomo, who himself was once a rebel as well before seeing the necessity of the Golden Path. Moneo and Siona are distant descendants of Leto's sister Ghanima. The cast is rounded out by Duncan Idaho, which Leto continues to task the Tleilaxu with restoring back to life over the last three millennia both for breeding and for the company he provides, despite many of them dying while trying to assassinate Leto himself.

Just when Leto's ultimate success is at hand, Ix has sent a new ambassador, Hwi Noree, designed to seduce Leto and make him vulnerable. Despite Hwi's best intentions to betray her Ixian superiors, her very presence does exactly what was intended, for the first time in millennia causing Leto to doubt his choice and sacrifice. The other threats to the Atreides continue, the Tleilaxu are also scheming throughout, the Spacing Guild and the Bene Gesserit attempt to influence events to the best of their comparatively feeble abilities and Siona lurks ready to pounce on the tyrant she resents so much.