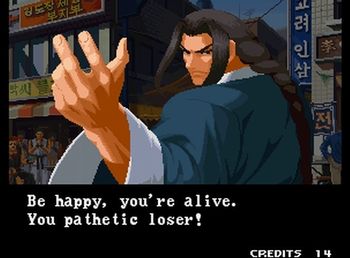 The insult hurts more than the injury.
"I did twenty years of martial arts training in ten years by skipping the discipline part so bring it!"
— Broadman, Sluggy Freelance
Advertisement:

More Sonny Chiba than Bruce Lee, the Arrogant Kung-Fu/Gongfu Guy is a loner. He's simply too mean to have friends. Unparalleled in combat, he has The Gift. His interpersonal skills are nonexistent, and his temper is best described as "volcanic." Living in a constant state of aggravation, his only joy comes from Trash Talking and putting "foolish fools" in their place (and sometimes even that's a stretch). He may not actually enjoy fighting, or even want to if he can help it, but it's all he knows, possibly through being trained by a Thug Dojo. Their view of the world means they can never understand the concept of the Worthy Opponent, as they are either better than you or you are the roadblock standing in the way of greatness (forcing them to recognize someone can be a Worthy Opponent is often where they will falter and reconsider their demeanor towards others).

With this character, Failure Is the Only Option. They are almost always defeated by The Hero and are never the protagonist. Much of the time, they aren't as talented as they let on. If taken seriously, they might defeat the hero or a member of the supporting cast, only to be defeated by the protagonist in a rematch. Often, if you're in an anime or eastern videogame, they'll spout off a line about how you are a hundred or more years too early to be fighting them. If this character is the protagonist, expect Break the Haughty to come into play or for them to in some other way learn An Aesop that true mastery comes from patience, discipline, and humility. If not, then they may be a Designated Hero or at least a Showy Invincible Hero.

Despite the name, this trope does not merely apply to merely those that know Chinese martial arts. Indeed all martial arts are probably represented at least once in this trope somewhere. Nor is the limit there — any skill may apply. The Cooking Duel is about as likely to involve one as anything else. That said, at least for martial arts, due to their a having strong national identity it's probably more likely for a foreigner to display this trope for some bonus Cultural Posturing about their proud history, especially if the native land has its own martial arts traditions. Which probably explains why many Japanese-made examples do use Kung Fu for this trope, while China might, say, have an arrogant boxer instead.

Tends to have a foil in a Martial Pacifist, the inverse of this trope. The Stock Shōnen Rival is often saddled with this characterization, as their contrast to the Stock Shōnen Hero archetype usually mandates some sense of discrimination against those not born with great potential. See also Smug Super, Jerk Jock. Contrast/See also Cavalier Competitor and Insufferable Genius. Also an inversion of Miles Gloriosus, who has the social skills to maintain a facade but zero bravery or combat skill to back it up.