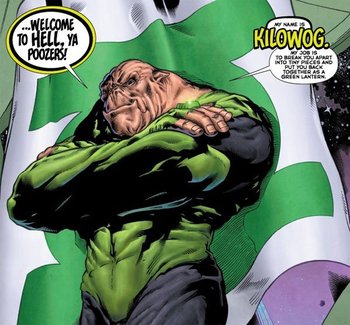 The worst part of training under Kilowog? Hearing "poozer" fifty times a day.
Garnet: Don't worry, Peridot. It's our sworn duty to protect anything that calls this planet home. And that includes clods like you.
Peridot: That's my word...
— Steven Universe, "Hit the Diamond"
Advertisement:

Some characters don't take the saying "If you don't have anything nice to say, don't say anything at all" to heart. Other characters have a favorite Catchphrase. What happens when you put the two together?

A Sub-Trope of Catchphrase. This is what happens when a character is fond of using a particular insult at a frequent basis. It can range from a demeaning nickname (like "Dumbass"), an expression (like "Kiss my ass"), or even a threat ("I'm going to kick your ass").

The opposite of this trope is Affectionate Nickname, though a Catchphrase Insult used as one is an Insult of Endearment.