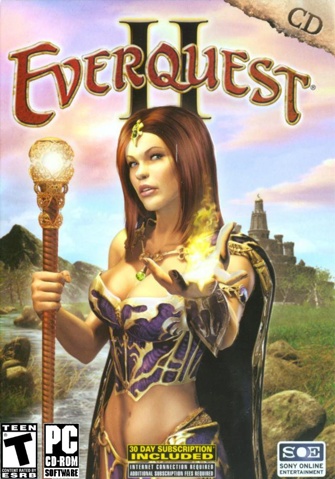 EverQuest 2 (2004) takes place 500 years after the original EverQuest. Immediately after the events of the Plane of Time from the first game, the Gods all left, the Ogres started the 2nd Rallosian War and nearly conquered all of Antonica again, Norrath suffered from a great cataclysm known as The Rending that tore up the entire planet over the course of 300 years, and finally, "The Shattering" happened when the moon Luclin exploded, raining down on the face of Norrath. Antonica took the brunt of the armageddon, despite having already been split into several continents from the Rending. The initial myth arc was that the seas were finally calm enough after Luclin's fall to be sailed, and the adventurers were seeking out all the old lands. There was also a cold war going on between Freeport and Qeynos. The former fell under the hold of the mysterious Overlord Lucan D'Lere, the latter is ruled by the descendant of EQ1's Antonius Bayle, Antonia Bayle.

Then came expansions. Well, first came "adventure packs", a concept sort of like a mini-expansion that didn't prove very popular. The continents of Faydwer, Kunark, Odus, and Velious would come soon enough, each continent having their own share of troubles. In addition to the expansions, content is added to the game in the form of "Live Updates". Sometimes the Live Update content is only available to players with the most recent expansion, but other times it's completely free.

EQ2 added a few new races to the game, as well as vastly different gameplay mechanics. Most notably, there is ample content for single players, and it is possible to advance to the maximum level (100 as of the Altar of Malice expansion) without ever stepping into a group. Quest lines are easier to follow, and rewards are easier to come by. However, EQ2 now faces the same issue its predecessor does of too many players at the upper level. SOE has responded to this problem by trying to make it easier for players to rush through all of the "old world" content and get to maximum level as fast as possible.