God of the Dead 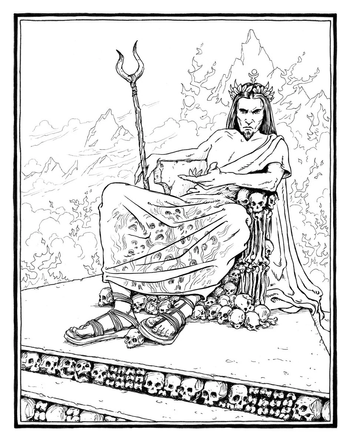 "You like what I've done with the place? I find redecoration helps bring out the very best in the god of the damned!"
"Yo, hey, how ya doing everybody? Got a minute? Hades, Lord of the Dead. Nice to see ya. Hey, guess what? I've got a place for you DOWN UNDER!"
— Hades, Kingdom Hearts
Advertisement:

In mythology, gods often exist to explain aspects of nature that a culture cannot otherwise understand. The more common and important a given thing or phenomenon, the more likely it is to have a god representing it and the more likely that god is to be seen as important and widely revered. Death, as the most universal constant in the human experience, has consequently had its own fair share of patron deities.

In personality, these deities are typically grim and uncompromising figures, neither cruel nor merciful but unwaveringly dedicated to ensuring that their part of creation works like it's supposed to, mirroring the finality and impartiality of death itself. People must die when their time comes; the dead may not cross back to the world of the living; and, once a soul shuffles off its mortal coil, be they saint or tyrant, neither prayer or offerings nor the pleading of other gods may alter their judgement. Consequently, these deities often loathe undeath and necromancy, seeing them as perversions of the cycle of life and death.

Less commonly, however, gods of death may be portrayed as malicious or evil figures who actively spread death and relish their power over mortals. In extreme cases, these figures may be outright Omnicidal Maniacs seeking to end all life and bring all mortal souls within their domain. Less extreme or proactive examples may still enjoy lording their power over mortals, gloating over each soul that slips into their grasp, and raging at perceived thefts when a mortal literally or figuratively cheats death. These sorts, unlike the first kind, tend to have a much more favorable view of the undead and often use them as minions and enforcers.

Gods of Death often have a tenuous or distant relationship with living mortals. Their worship is rarely attractive, as in most cases service and devotion won't get you favorable treatment or longer life. Their priesthoods are often limited to funerary orders who tend to the dead, but it's also common for their worshipers to be charged with hunting down undead beings and those who extend their lives unnaturally and, so to speak, "easing" their passage into the hereafter. Everybody Hates Hades may also be in play in-universe, and death gods are feared or resented by the living.

Gods of Death are typically inspired by historical examples of such deities, most prominently the Greco-Roman god Hades. The Grim Reaper is also a common source of visual and thematic inspiration.

See also Don't Fear the Reaper if the God of the Dead is depicted as a kindly and/or impartial figure; they'll often be The Stoic as well. These figures may be served by or allied with Psychopomps; note that Shinigami literally means "death gods". Subtrope of Stock Gods. Gods of the dead are usually responsible for the Judgement of the Dead.