A Molten Date with Death 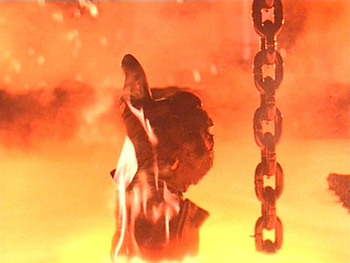 Lava, as we all know, is one of the hottest substances on planet Earth, reaching up to thousands of degrees and is capable of burning anything or anyone unfortunate enough to fall into it or be in its path into charred nothingness within a matter of seconds. And if it doesn't kill the victim instantly, they will often get submerged and then resurface with their body quickly melting in the intense heat, all the while still conscious enough to feel it. The same can also apply for superheated substances like molten metal, which typically has the same makeup and effects as lava if it has a high enough boiling/melting point. The process at which objects on contact burn or melt, depending on the media, can also vary from instantly, to very slowly. Either way, definitely not a fun way to die unless you like being burned to ash while still conscious enough to feel it.

This trope commonly happens in video games and other sorts of fictional media when characters are setting foot into a Lethal Lava Land, where lava pits are environmental hazards that can kill characters instantly (or in some cases, very quickly unless they can climb out in time, but may have to deal with being on fire for a period of time directly afterwards) unless some kind of equipment can be used to prevent it. In terms of video games, it also typically happens to bosses, specifically ones who decide to fight the player over or near a pit of lava, only for the bosses themselves to be the ones knocked into it.

It may also happen in real life, but happens a lot less frequently due to many people not being reckless or crazy enough to go anywhere near a lava pit or volcanic crater for the fun of it. Consequently, urban settings can invoke it with industrial steel plants and large vats of molten metal.

Again, not a pleasant way to go out.

As a Death Trope, some spoilers will be unmarked. You have been warned!

Miko dies to an ill-placed bucket of lava in Minecraft, then panics at the resulting damage to her house after respawning.

Miko dies to an ill-placed bucket of lava in Minecraft, then panics at the resulting damage to her house after respawning.